So in the UK ‘Where’s the loo?’ is perfectly acceptable polite stranger conversation. As is, ‘Where’s the toilet?’ 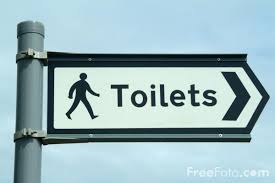 Now, when I first arrived in LA I was smart enough to cotton on quickly that ‘loo’ wasn’t going to work out too well for me. It doesn’t usually get you a response too quickly amidst all the belly laughs and general group amusement. Which isn’t the best, especially when you do actually really need to find the loo, not merely laugh about the idiosyncracies of language.

Which of course, I am more than happy to do at times when I’m not about to wee myself.

So naturally I went with ‘toilet.’ A strong choice, I thought. I mean, that’s perfectly acceptable. After all we all know what a toilet is and what it’s for. Clear communication all round. Fantastic.

Apparently not. When I said ‘toilet,’ people looked at me as if to say ‘Woah there! STOP! That is TOO MUCH information about where you are going and what you will be doing there. Disgusting.’

Here, you say ‘restroom’ or ‘bathroom.’ Now, restroom is very nice and pleasant. But really, it isn’t that descriptive or at all accurate.

I only wish there were rooms with giant big comfy beds of varying mattress strength to suit all tastes that we could all nip over to for a quick forty winks a few times a day. Maybe with coin-operated electric blanket machines. And complimentary eye-creams if you’re at a posh one. Then you’d be able to say, quite truthfully, ‘Oh don’t mind me I’m just popping to the rest-room.’

And I mean really, that would be lovely. But is that the reality? No. You’re not going to rest. You’re going to use the toilet. We all know that.

So I could never really get ‘restroom’  to roll off the tongue. Even-though I do enjoy the concept, it doesn’t always arrive in my mouth when most needed.

So I’m left with bathroom. Which again, similar problems. Is there a bath there? No. A bathroom is in your house. If you asked a British person where the bathroom is they’d assume you were inviting yourself over to their house, possibly for a shower. Which might not always be exactly what you’re after.

I’ve had to do cognitive exercises to think of a ‘bathroom’ as the larger bathroom belonging to the proverbial public space in order to make the right mental leap. This was a different kind of toilet-training. It’s taken serious dedication just to get the casual use of the word ‘bathroom’ in social situations totally down.

So brilliant. All well and good. I’m blending it. People don’t think I’m gross. I can find the toilet without having to say toilet. Gold star me.

Then, last summer, approx a year after arriving to LA I went back to the UK for a visit. I was at a classy Edinburgh lunch spot with my known-each-other-since birth BFF. We’re treating ourselves because after all it’s been a while. We’re probably the loudest people that have ever eaten there, and you’d be hard-pressed to find our apple crumble portions with a microscope, but the Scottish waiter is pretty fit. Life is good.

So afterwards I pop on over to our new waiter friend and I’m like:

‘Excuse me, but where’s the bath-toilet?’

Because apparently that’s when my brain exploded.

‘Bathroom’ – might have got away with or at least could have explained quickly in a nonchalant manner. ‘Just flew in from LA. You know how it is. I meant the toilet, of course. I didn’t mean I was coming over to yours for a shower. Unless you– No?’ You know. Something casual like that.

‘Toilet-room.’ Bit weird but at least pretty much dead on accurate. Your basic, leave quickly afterwards.

But ‘bath-toilet?’ I mean, what on earth is a bath-toilet? Wherever your mind is going, it’s not good is it.

So it turns out that he didn’t know where the bath-toilet was. He explained they only had regular toilets.